This year Rehana, took a group of 13 competition winners to Spain to not only watch the final but also enjoy a host of unforgettable activities in the days leading up to the match. City tours, tapas lunches, a Michelin-star restaurant, flamenco dance lesson, beautiful Retiro park, the ancient city of Toledo, and then … of course … the game itself. 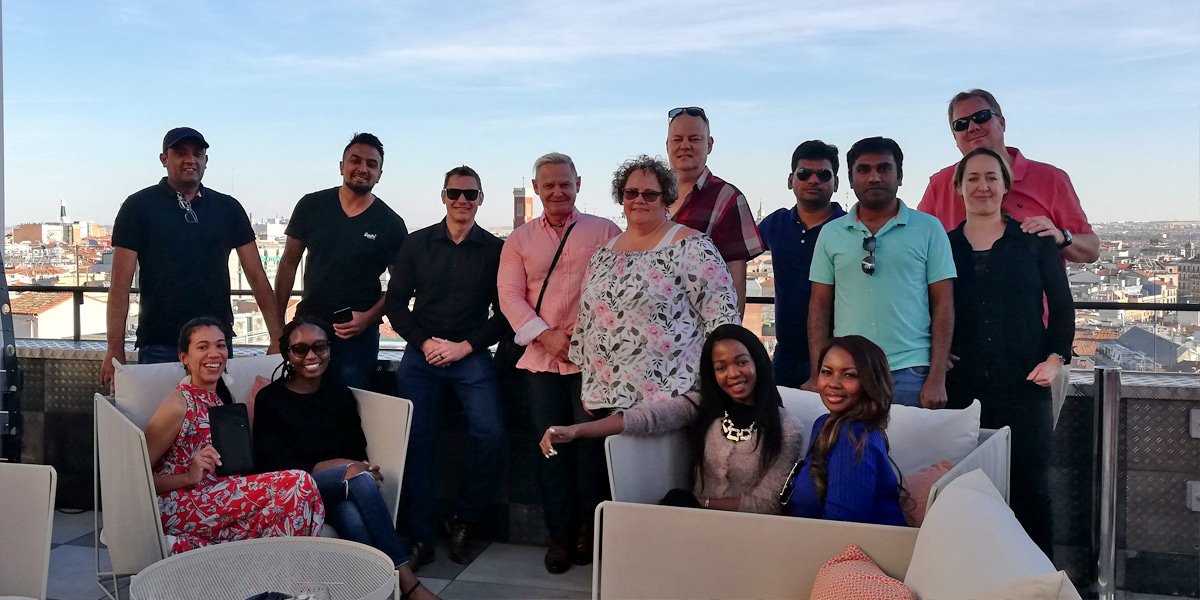 The group flew in on Tuesday morning, arriving a good few days before Saturday’s final between Tottenham Hotspur and Liverpool. This gave plenty of time to get a feel for a day in the life of the city before the thousands of fans arrived.

Being the middle of summer, the weather was amazing! Long days with temperatures averaging around 30ºC and the sun only setting after 9.30pm. Madrid really comes alive in summer. It’s great to enjoy just being there in this sunny European capital, so we designed a programme that included a good mix of organised activities as well as time to relax, explore or do a bit of shopping. 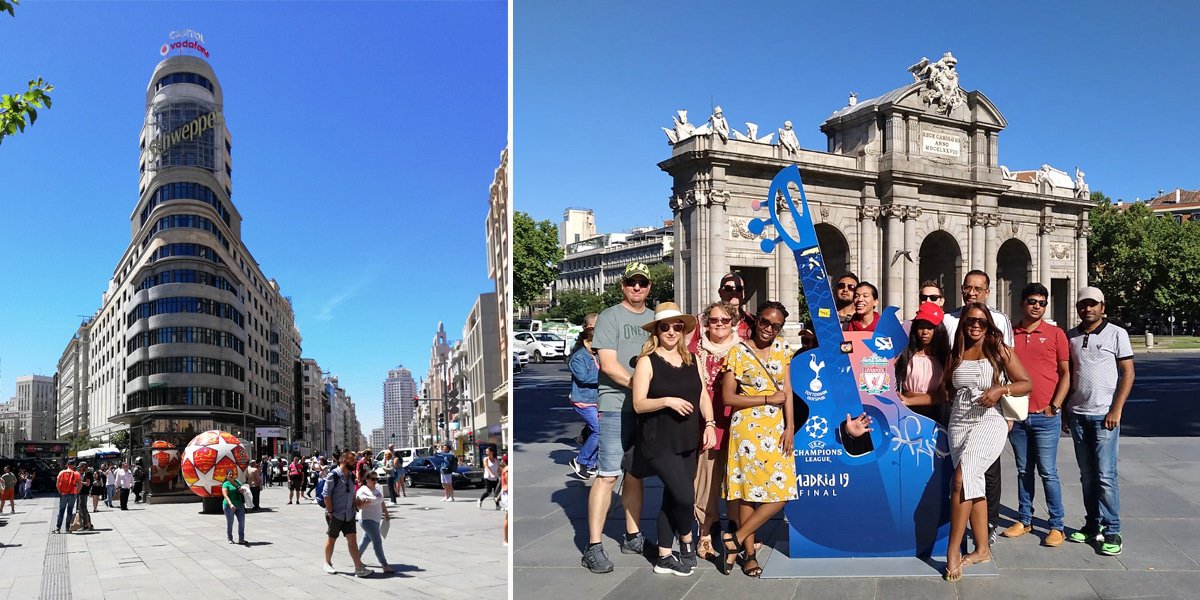 Everywhere around the city were signs of the final to come.

That first day, after a 3-course Mediterranean-inspired lunch (Rehana particularly enjoyed her starter of prawns with gazpacho) it was time to check in and freshen up. We’d selected a central hotel in the very heart of Madrid, close to restaurants, shops and within easy walking distance of the Fan Fest.

The beautifully warm evening was perfect for welcome cocktails at a rooftop bar looking out across the city, followed by an authentic Spanish dinner. Food certainly is a highlight of any trip to Spain: the delicious and varied tapas, local markets, fine dining restaurants and don’t forget those fluffy churros dipped in chocolate – truly a treat! 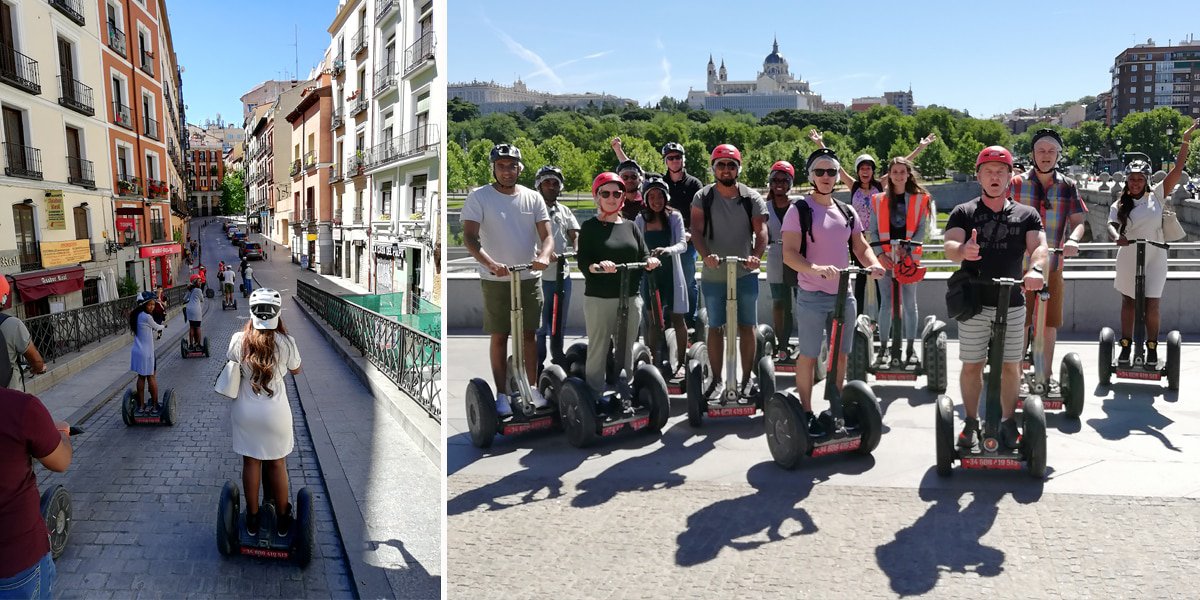 Segway tour through the city. A fantastic way to get around!

The next day started with a guided Segway tour, gliding through the streets of Madrid, which everyone really enjoyed! Not only are Segways fun but they’re also a great way to cover more ground, easily move between attractions and get a good overview of the city.

That afternoon was left open to go for a stroll or do a bit of shopping. The whole city was decorated with signs of the big match to come from giant-sized footballs to a huge inflatable trophy in front on the Royal Palace (where the group nearly saw the Queen of Spain). 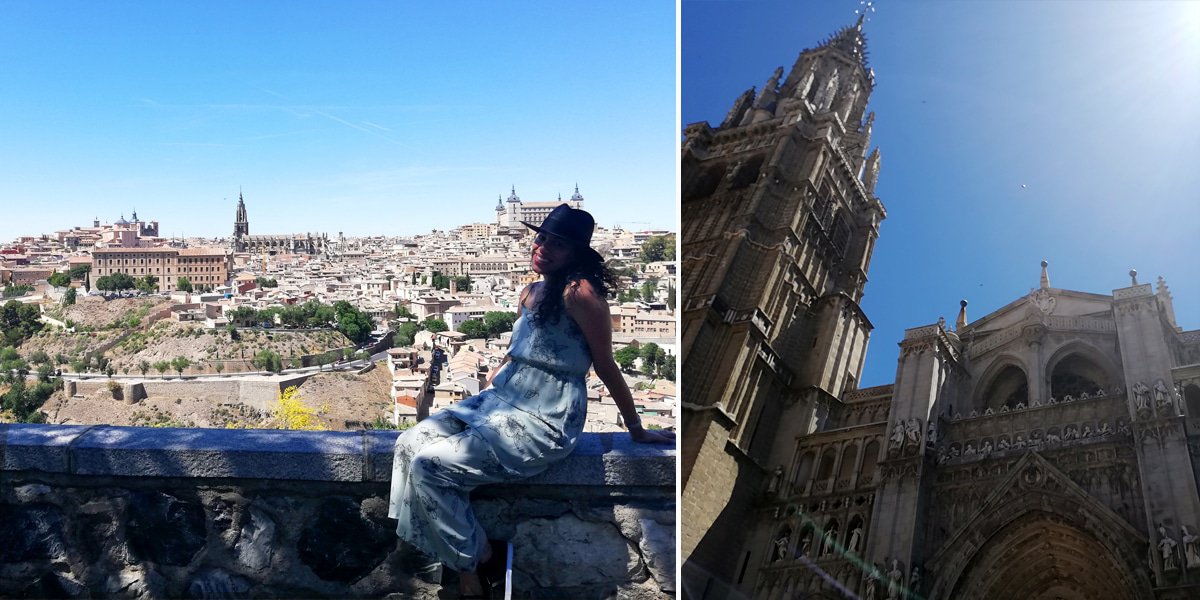 Exploring the historic city and Toledo Cathedral, a Gothic masterpiece.

Thursday was spent exploring the ancient walled city of Toledo. The former Spanish capital, now a UNESCO World Heritage Site, has an impressive location perched on a rocky hill about an hour’s drive out of Madrid.

Escalators took the group up to the citadel where they heard tales of popular legends, followed their guide through narrow streets, went down to the Roman baths, stared up at the spires of Toledo Cathedral and took in the fantastic views. A culinary highlight was lunch at Restaurante Adolfo, a Michelin-star restaurant alongside the cathedral. 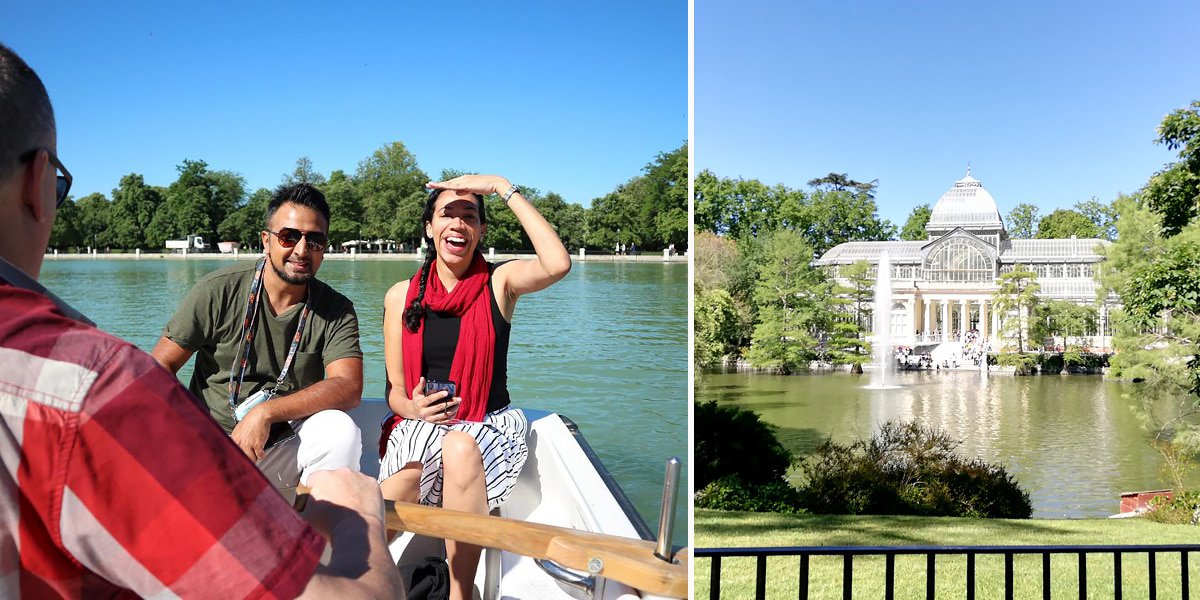 Rowing across the lake in Retiro Park, and the incredible Crystal Palace.

The next day everyone got to explore beautiful Retiro Park on our ‘Urban Photography Amazing Race’. These lovely gardens are perfect for a hot summer’s day, especially when you include a spot of rowing on the lake.

By now the Liverpool supporters had arrived in the city, and Madrid’s streets were filled with singing and cheering soccer fans! The evening ended with a flamenco dance lesson followed by a 3-course dinner and flamenco show (which included the dance instructor). 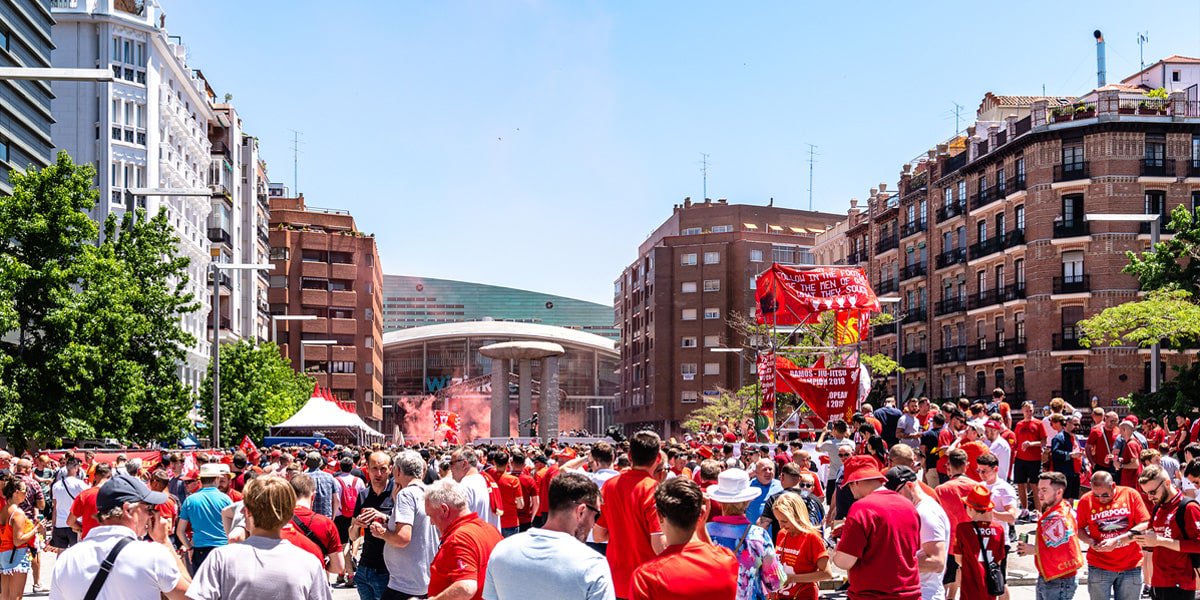 The fans arrive! The streets become packed with Liverpool supporters dressed in red.

Match day! The UEFA Champions League Final is the most watched annual sporting event in the world. Seeing it on a screen is one thing, but being there in the stadium? Unbelievable! Even those who aren’t die-hard football fans can’t help but get caught up in the incredible atmosphere.

The Grammy Award-winning band, Imagine Dragons, put on a great show in the opening ceremony. And then it was time for the football action to begin, with Liverpool and Spurs battling it out for the coveted cup. 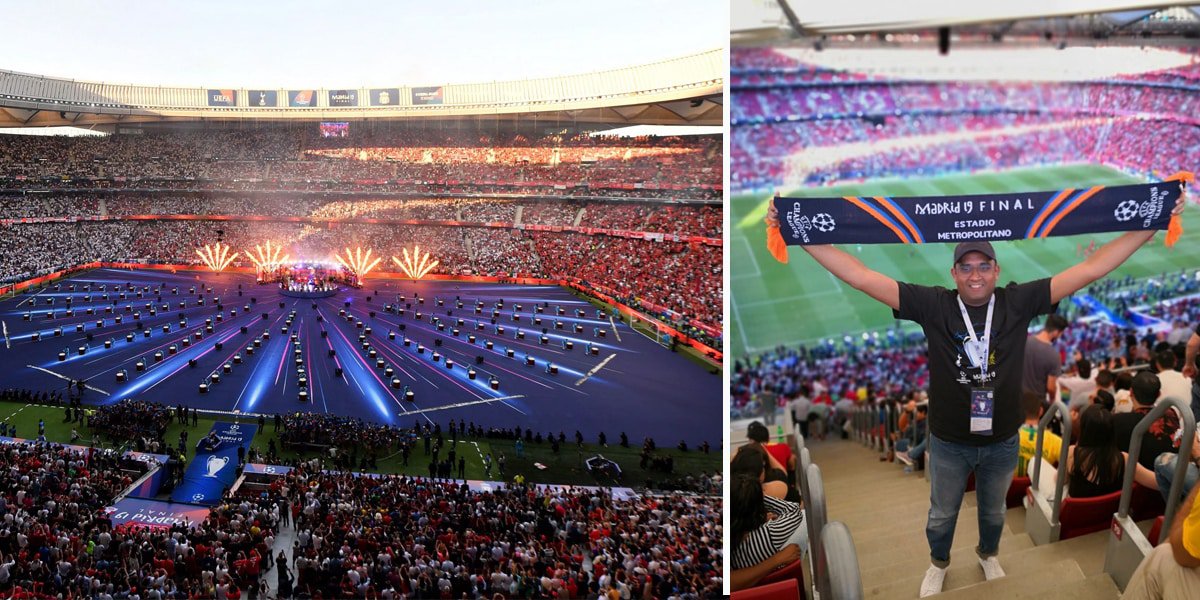 Game time! The opening ceremony and getting ready to watch the match.

Having witnessed Liverpool take their sixth Champions League title, it was time for the group’s last day in Madrid. What better way to finish this incredible experience than with a guided tour of Santiago Bernabeu Stadium, home of the great Spanish football giants Real Madrid. 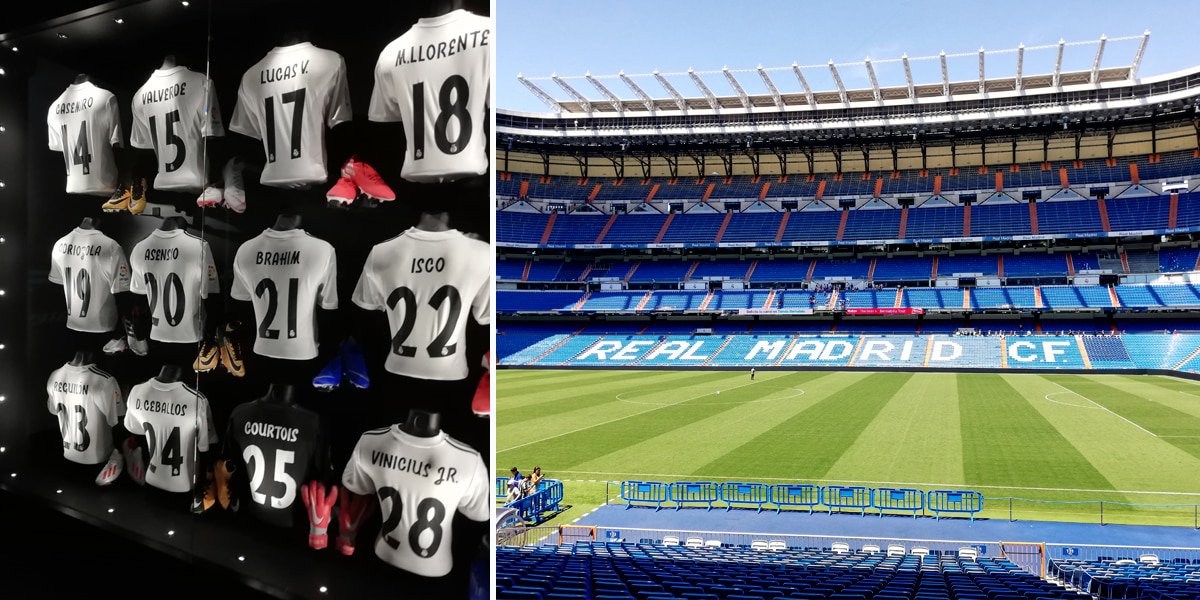 We couldn’t leave Madrid without a tour of the legendary Real Madrid Santiago Bernabeu Stadium.

A major sports event can transform an incentive or winners’ trip into an aspirational journey. There are so many great events to choose from. If you’d like to know more simply drop us a message.